Mention Delgado and nine times out of ten (an informal guestimate) someone will say they know someone who goes to school here, or went here, works or worked here, or has some kind of relationship with the College.  Run through the list of possible combinations… family, friends, friends of friends, family of friends, neighbors, co-workers, so-and-so, and so on… there’s always a Delgado connection in there somewhere, somehow.

Last month, shopping at Home Depot and making chit-chat with Donald Hazard, the sales associate.  I mentioned I worked at Delgado.  In return, Donald shared that his son just graduated with an Accounting degree and how impressed he was with our graduation ceremony.  He inspired me to whip out my iPhone and capture his testimonial…

The following night, I went to an opening at Michalopoulos Gallery where I met Sissy Barrios, who I learned was a first year Delgado Nursing student. She said she was changing careers and was drawn to the Delgado Charity School of Nursing’s quality reputation. She volunteered, without any prompting, how happy she was to be in the Nursing program and what a great experience she was having, and she let me take her picture. 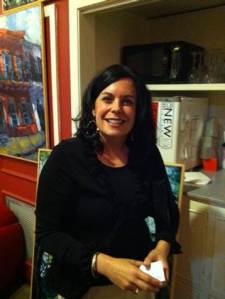 Being in P.R. is fun when you bump into walking-talking success stories everywhere you go. There’s an echo out there in the “real world” that I hear every time I mention Delgado. It always comes back to me in so many interesting and unexpected ways.