Have you ever wondered why someone’s name is on a building? Most of us should know who Isaac Delgado is of Isaac Delgado Hall (just in case, he is the founder of Delgado Community College). There are buildings on Delgado’s campuses that bear names of individuals for various reasons. One of those individuals is Arthur J. O’Keefe of the O’Keefe Administration Building. 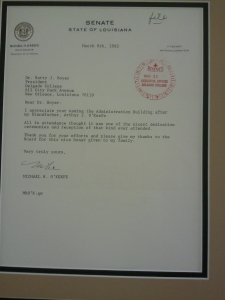 “Because of the help given to Delgado since its inception by the O’Keefe family, I am asking that this new administration building be named the Arthur J. O’Keefe, Sr. Administration Building.” This request was written by President Harry Boyer in a letter on June 10, 1980 to the Board of Trustees for State Colleges and Universities. Three months later a memo was sent out to excuse all students, faculty, staff, and administrators from class and work to attend the ground breaking ceremony. On March 4, 1982, the ribbon was cut to welcome employees of Delgado Community College into a brand new million dollar facility.

Many public servants attended the affair. Ernest “Dutch” Morial, mayor of New Orleans, Jimmy Fitzmorris, executive assistant to the governor and Michael H. O’Keefe, president of the Louisiana State Senate (and grandson of Arthur J. O’Keefe Sr.) were all guest speakers at the dedication ceremony.

r Joseph O’Keefe Sr. O’ Keefe Sr. was born in New Orleans on Nov. 4, 1876. He married Mary (Mamie) McDonald and they had seven children together. Many of his own children and their offspring followed in his footsteps. O’Keefe Sr. owned Arthur J. O’Keefe Teas & Coffees. He was an importer/roaster and owned stores located Uptown and in Algiers. He was a very generous man who gave to the College and fed the poor, especially during the Thanksgiving holidays.

O’Keefe Sr. was very active in the community and the Democratic Party, as follows:

As commissioner of public finance under Mayor Martin Behrman, O’Keefe Sr. automatically became acting mayor upon Mayor Behrman’s death in 1926. He was frequently ill throughout his term as mayor, and as a result, he was forced to take a leave of absence in 1929.

T. Semmes Walmsley, who was commissioner of finance at that time, took over as interim mayor and held the office until the next election in 1930. Plans for the Municipal Auditorium, the Criminal District Court Building and the Orleans Parish Prison (OPP) were conceived under O’Keefe Sr.’s administration.